All of us have seen photographs that move us emotionally. Images with impact or mood that have an elusive "something" that makes us go wow. It might be the color, light, composition or subject, but how it is presented to the viewer is what makes that image special. The Canadian Rockies are amazing in the right light, but pretty dull when cloud or fog covered. The ocean can be beautiful but it can be boring if the composition and light are bad.
Since I am primarily a landscape photographer, the light is critical to my images.  In the wrong light or bad light, images can really fall flat...I speak from experience.
There is a learning curve to photography, it takes time to develop an eye for good composition and a feel for lighting...it has taken me years of practice (and looking at photographs and paintings by masters of photography and art) to get somewhat proficient. But there are many days when my images fall flat and must be deleted: don't be afraid to delete the junk! Some people never delete images until they see them on the computer, however, I will delete in camera if the composition fails when I review them on the LCD. You must be cutthroat about your images, because as good as you may be in Photoshop or Lightroom, if your shots are bad, admit it..why waste time editing something that should be deleted. Some people don't like to shoot at the same places; that's ridiculous...I keep going back to Beavertail or other areas on the coast because weather is always changing; even my attitude changes day to day..I might be cranky one night, but in a good mood the next: it will have an impact on how I photograph.
Here are a few examples of what I am discussing.  The first one is taken at Ponagansett Falls in Scituate. Be patient!  This night the sky looked like a dud, but as the sun set some clouds appeared on the horizon and things began to change..These three images were all taken within a half hour of each other.

The next image is a wide angle taken at Castle Hill in Newport. I was moving around on the rocks looking for a good composition about an hour before sunset. Always try to get to your location at least an hour prior to sunset; it gives you time to scout for the best spot and do test shots. The second shot was taken as the sun was setting and the clouds and rocks formed diagonals leading to the lighthouse. 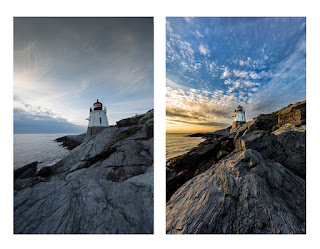 The next image is in the Canadian Rockies...the first shot was taken without sun. It was cloudy and foggy but it was worth waiting for the sun to break through the clouds, because it burned off a lot of the cloud cover revealing the mountains in the background.

The last one is the combined use of twilight and slow shutter speed. The first ferris wheel shot was taken when it was not moving but was somewhat lit near twilight. The second, which is obviously better, was taken at twilight when there were passengers and the wheel was turning. 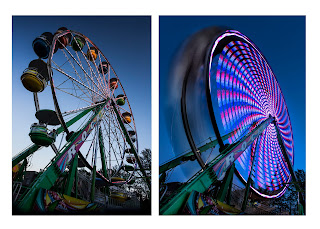 I know a lot of photographers will tell you they shoot only at F8, the sweet spot on their lenses..that is nonsense. I shoot at F16, 18, 22...the diffraction is minimal with the newer lenses; I need to shoot at those apertures to allow light to hit the sensor a long time to get the effect I am seeking; F8 doesn't work for me unless there is wind, then I will use it on the foreground to stop movement..also, I use every filter imaginable on my lenses: soft edge grads, hard edge grads, NDs, polarizers, reverse NDs: whatever it takes to give me what I want...
To me, the most important thing about getting an image with impact is looking at the world with awe. Nothing is jaded to me. Think of everything you see as if it were for the first time.
Posted by Marion at 9:49 AM No comments:

Most people tend to do most of their photography when on a workshop, meetup, tour, or on vacation. The problem with this is that between those times, there is almost no shooting.  The camera is put away until the next adventure; this leaves you at a disadvantage dealing with composition and creativity. To improve your eye, it is important to photograph consistently and in order to do this, it is necessary to shoot near home or even in your home.
And it is important to know your camera well; this can come in very handy at night or when your flashlight fails. If you are struggling with your camera settings, how can you be creative? If you have custom functions, learn to use them. I am primarily a landscape photographer and have three custom functions set up for this genre.  If I am under pressure to shoot as the light is changing rapidly, these are my fall back settings:  they can be manipulated if necessary.
A lot of you are saying,"It is boring where I live; there is nothing to shoot.". This is when you have to be creative and dig deep into your  brain for ideas. The images I have attached were all taken in or near my house.
The next image is a bunch of leaves on a thistle plant that I happened to pass on a walk with my dog. 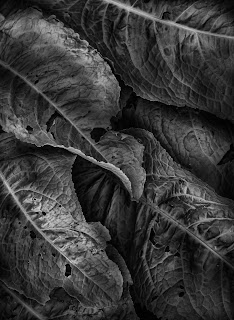 The next image is a bunch of trees in the woods...nothing special about them, so I used a slow shutter speed and moved the camera vertically to get something interesting. 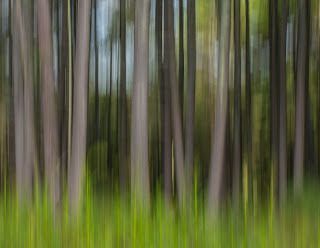 The final image is a coil of rope..that's it...it was at a boatyard lying on the ground. I picked it up and changed the shape of the coil so it had more of a vortex feel. 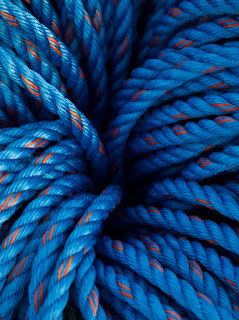 As you see, there is no great image here, but there is a learning opportunity.  They are all decent images that gave me an opportunity to work with composition and creativity. And even with color.
Maybe you have to force yourself to do it initially, but the exercise is well worth the effort.
Posted by Marion at 9:04 AM No comments: